I've been working with TypeScript for a long long time. I think I'm not too bad at it. However, to my despair, some low-level behaviors still confuse me:

I was doing some research on never, and stumbled upon Zhenghao He's Complete Guide To TypeScript’s Never Type (check out his blog, it's super cool!). It mentions that a type is just a set of values, and — boom — it clicked. I went back to the basics, re-formulating everything I know about TS into set-theoretic terms. Follow me as I:

In the end, I solve most of my questions, grow much cozier with TS, and come up with this brilliant map of TS types: 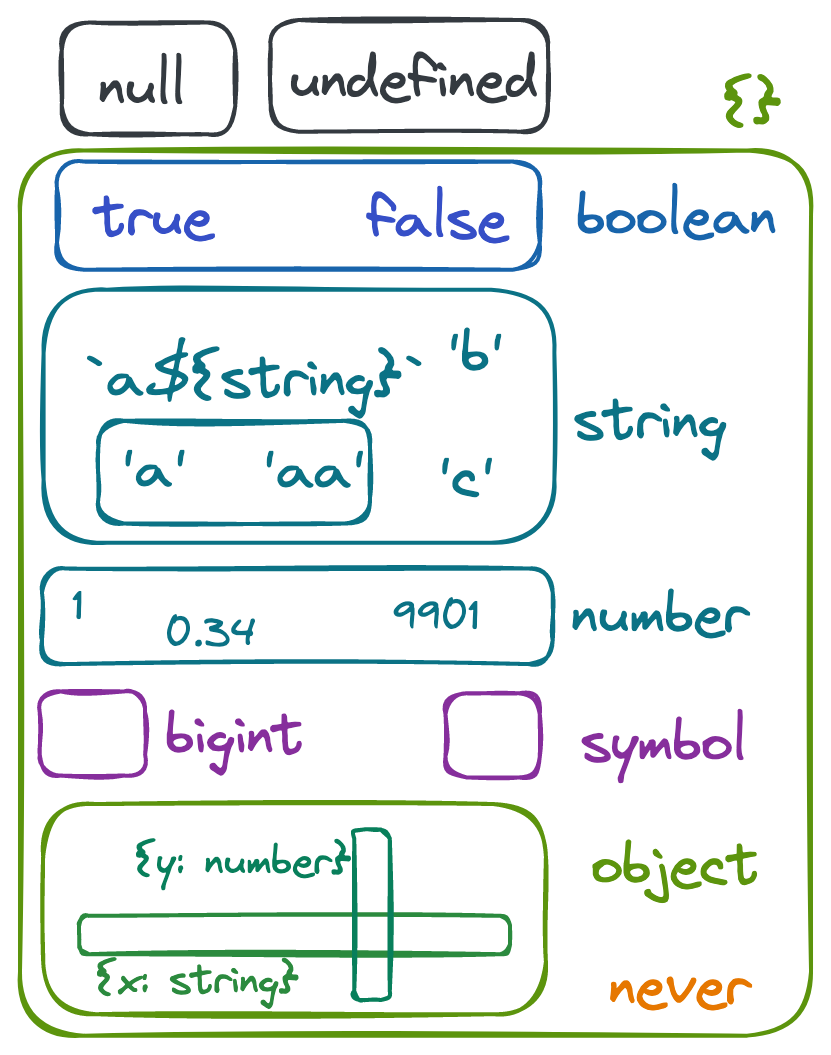 First up, a refresher on set theory. Feel free to skip if you're a pro, but my algebra skills are a bit rusty, so I could use a reminder of how it works.

Sets are unordered collections of objects. In kindergarten terms: say we have two apples aka objects (let's call them ivan and bob, shall we?), and some bags aka sets where we can put the apples. We can make, in total, 4 apple sets:

Sets are often drawn as "venn diagrams", with each set represented as a circle: 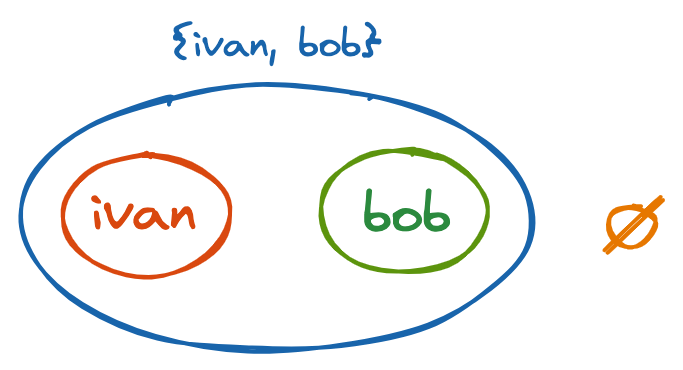 Apart from listing all the items, we can also build sets by condition. I can say "R is a set of red apples" to mean { ivan }, considernig ivan is red and bob is green. So far, so good.

There are a few useful operators defined on sets:

This should be enough! Let's see how it all maps to types.

What does it have to do with types

So, the big reveal: you can think of "types" as sets of JavaScript values. Then:

This change of view already yields some useful insights:

I know this all sounds like a lot, so let's proceed by example, starting with a simple case of boolean values.

For now, pretend JS only has boolean values. There are exaclty two — true and false. Recalling the apples, we can make a total of 4 types:

The diagram of the "boolean types" is basically the one that we had for apples, just the names swapped:

Now, a little self-assessment of the tricky extends cases:

If you recall that "extends" can be read as "is subset of", the answer should be clear — A0,B1,C1,C1. We're making progress!

null and undefined are just like boolean, except they only contain one value each. never extends null still holds, null & boolean is never since no JS value can simultaneously be of 2 different JS types, and so on. Let's add these to our "trivial types map":

Strings and other primitives

With the simple ones out of the way, let's move on to string types. At first, it seems that nothing's changed — string is a type for "all JS strings", and every string has a corresponding literal type: const str: 'hi' = 'hi'; However, there's one key difference — there are infinitely many possible string values.

It might be a lie, because you can only represent so many strings in finite computer memory, but a) it's enough strings to make enumerating them all unpractical, and b) type systems can operate on pure abstrations without worrying about dirty real-life limitations.

Just like sets, string types can be constructed in a few different ways:

We can go a bit further by making unions and intersections of literal and template types. Fun time: when combining a union with a template, TS is smart enough to just filter the literals againts the template, so that 'a' | 'b' & `a${string}` = 'a'. Yet, TS is not smart enough to merge templates, so you get really fancy ways of saying never, such as `a${string}` & `b${string}` (obviously, a string can't start with "a" and "b" at the same time).

However, some string types are not representable in TS at all. Try "every string except 'a'". You could Exclude<string, 'a'>, but since TS doesn't actually model string as union of all possible string literals, this in fact evaluates back to string. The template grammar can not express this negative condition either. Bad luck!

The types for numbers, symbols and bigints work the same way, except they don't even get a "template" type, and are limited to finite sets. It's a pity, as I could really use some number subtypes — integer, number between 0 and 1, or positive number. Anyways, all together: 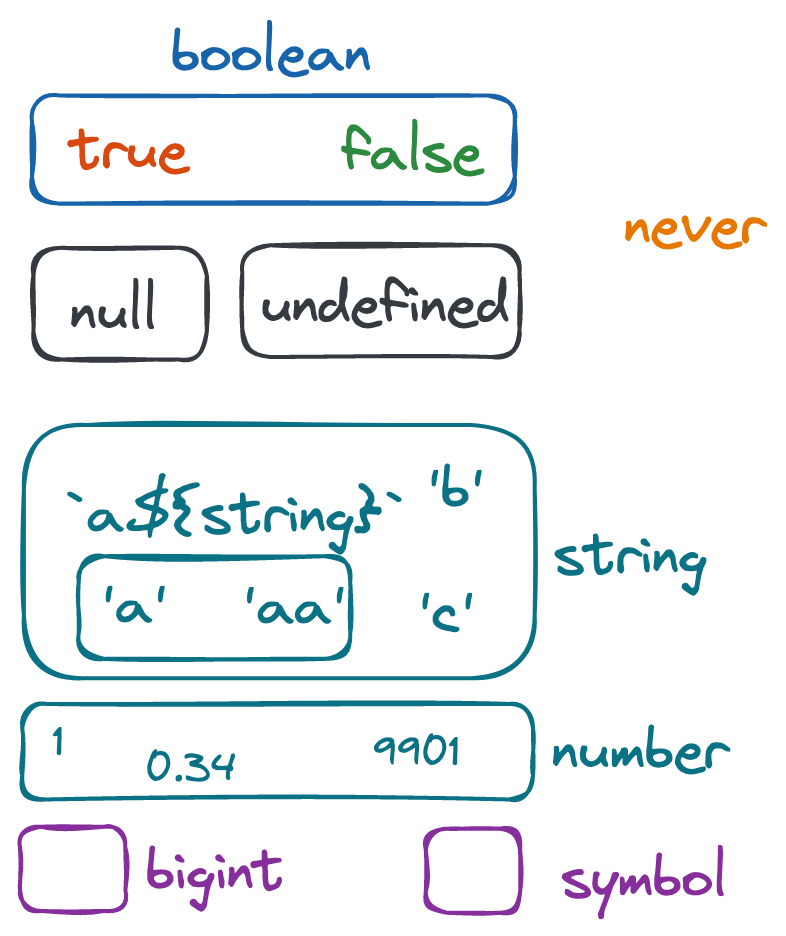 If you think const x: {} = 9; makes no sense, this section is for you. As it appears, our mental model of what TS object types / records / interfaces was built on the wrong assumptions.

First, you'd probably expect types like type Sum9 = { sum: 9 } to act like "literal types" for objects — matching a single object value { sum: 9 }, adjusted for referential equality. This is absolutely not how it works. Instead, Sum9 is a "thing on which you can access propery sum to get 9" — more like a condition / constraint. This lets us call (data: Sum9) => number with an object obj = { sum: 9, date: '2022-09-13' } without TS complaining about unknown date property. See, handy!

Then, {} type is not an "empty object" type corresponding to a {} JS literal, but a "thing where I can access properties, but I don't care about any particular properties". Aha, now we can see what's going on in our initial mind-bender: if x = 9, you can safely x['whatever'], so it satisfies the unconstrained {} interface. In fact, we can even make bolder claims like const x: { toString(): string } = 9;, since we can x.toString() and actuallty get a string. More yet, keyof number gives us "toString" | "toFixed" | "toExponential" | "toPrecision" | "valueOf" | "toLocaleString", meaning that TS secretly sees our primitive type as an object, which it is (thanks to autoboxing). null and undefined do not satisfy {}, because they throw if you try to read a property. Not super intuitive, but makes sense now.

Oh, and what about that odd object type? Since every property on an interface just adds a constraint to the "thing" we're typing, there's no way to declare an interface that filters out primitive values. It's why TS has a built-in object type that means specifically "JS object, not a primitive". Yes, you can intersect with object to get only non-primitive values satisfying an interface: const x: object & { toString(): string } = 9 fails.

Let's add all of these to our type map:

extends keyword in TS can be confusing. It comes from the object-oriented world where you extend a class in the sense of adding functionality to it, but, since TS uses structural typing, extends as used in type Extends<A, B> = A extends B ? true : false is not the same extends from class X extends Y {}.

This "subset" view is the best way to never mix up the order of extends operands:

Typescript has two types that can represent an arbitrary JS value — unknown and any. The normal one is unknown — the universe of JS values:

On a puzzling side, though:

All in all, it's safe to think of unknown as "the set of all possible JS values".

any is the weird one:

We should conclude that any is "some set, but we're not sure which one" — like a type NaN. However, upon further inspection, string extends any, unknown extends any and even any extends any are all true, none of which holds for "some set". So, any is a paradox — every set is a subset of any, but any might be empty. The only good news I have is that any extends unknown, so unknown is still the universe, and any does not allow "alien" values.

So, to finish mapping our types, we wrap our entire diagram into unknown bubble: 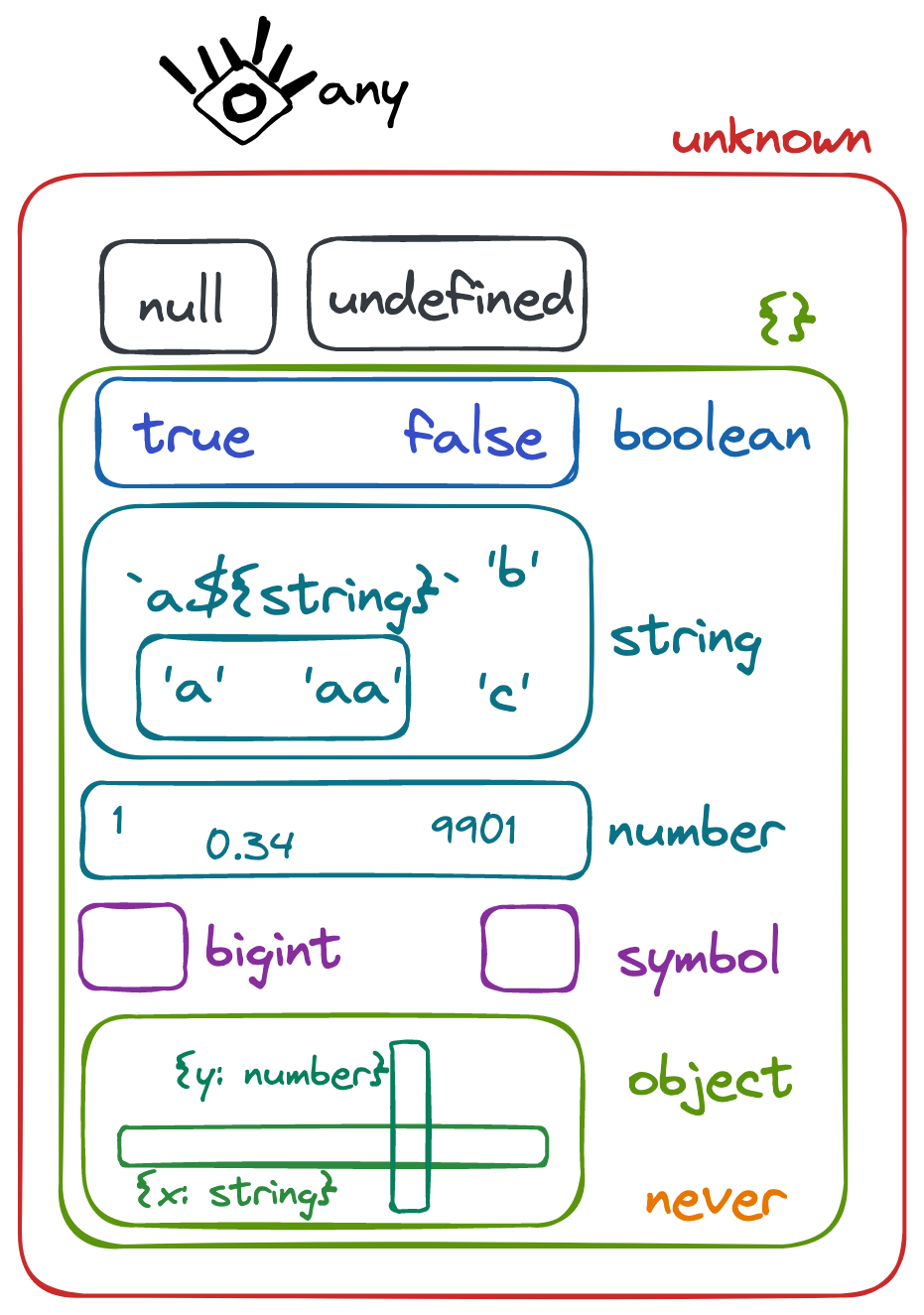 Today, we've learnt to that TS types are basically sets of JS values. Here's a little dictionary to go from type-world to set-world, and back:

Going back my our initial questions:

We still have a lot of TS mysteries to solve, so stay tuned!

Tweet
Share
Discuss on Twitter
More? All articles ever typescript javascript programming
Written in 2023 by your friend, Vladimir. Follow me on Twitter to get post updates. I have RSS, too. And you can buy me a coffee!
Older
Seven habits of bad interviewers
Newer
The complete guide to safe type narrowing in TypeScript