Like many of you, I've read Dan Abramov's excellent article, making setInterval declarative with React hooks. It's a great introduction to hook thinking and gotchas, highly recommended to any react dev. But by now the insistence on being declarative in every hook ever has gone too far, and it's starting to annoy me. Hook libraries that don't expose imperative handles at all are less useful, and using them comes with a real performance cost. How so? Let me show. 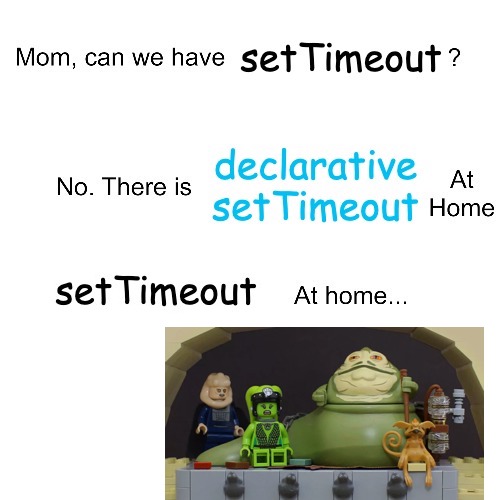 Let's jump straight into the code. I'm building a synthetic input with a nice "info" icon that explains what this input is for when the user hovers it. To prevent any jumpiness when the user just moves the mouse around, I open the tooltip after 100ms of hovering:

And here's the useTimeout hook — I'll skip the part where Dan explains why this code looks what it looks like, please check out his original post if you have any questions. I only replaced the interval with a timeout, because, to tell you the truth, I have used intervals exactly zero times in the past 5 years, but I use timeouts every week.

It's a nice, consistent hook that does many things right — in fact, it's similar to my idea of the perfect useCallback. Let's first admire the things it does right:

But then there's something I don't like that much. To set a callback, we switch the hovered state. This state change triggers the effect in useTimeout that actually sets the timeout. But, like every state change, it also happens to re-render a component. So, while we're calling our setTimeout, we also get to:

I mean, it will all probably happen pretty fast, but come on, is calling a setTimeout really worth all that fuss? Me, I don't think so. The idea of making my user's CPU go through all that hoops to call a function makes me very sad. Luckily, I know how to fix it.

Give me back my imperative

What if we were to skip the declarative part, and just tried to build a consistent hook wrapper around setTimeout? Here's my take (we use a very similar hook in our production code):

We can finally call timeout.set() and just have it setTimeout for us and do nothing else. I've left the original savedCallback logic intact, nothing wrong with it.

But now our Input has to wrangle with the nasty imperatives, and it probably looks awful. Not at all:

In fact, we've not only eliminated the extra render, but also removed the hovered state whose only job was to toggle the timeout. I'd say good old imperatives just scored a goal.

Were we imperative all along?

Upon closer inspection, our initial "declarative" useTimeout is not that declarative. Take note:

We're basically converting these imperative things into the declarative world, then back again.

Moreover, the mental model is slightly broken — while hovered flag supposedly means "timeout is running", it may not be the case. The timeout is either running or has already fired. But maybe that's just me being tedious.

What declarative can't do

Now suppose I want to implement a debounce with the declarative useTimeout. I want to track my user's mouse motion, and show a popup once he stops moving. For that, I normally set a small timeout to show the popup — 30ms will do — on mousemove. If the user moves the mouse again within the next 30ms, well, I set another timeout and try again. If the mouse stops, the timeout successfully fires, and the popup appears. Really simple (no React yet):

But the only way to set our decalrative useTimeout is passing a non-null delay. How would you do this with our declarative timeout?

Imperative timeout to the rescue:

How we can have it all

Before you point this out to me, I'd love to quote the original article's disclaimer myself: This post focuses on a pathological case. Even if an API simplifies a hundred use cases, the discussion will always focus on the one that got harder. I'll be the first to admit I'm now exploring a pathological case of a pathological case. Know why? Because that's the kind of stuff I enjoy.

Problem is, the fully declarative API most hooks offer is on a higher level of abstraction than imperative handles. JS culture of making lower-lever building blocks inaccessible to the library users has bothered me for a long time (ouch, I still remember that time I copy-pasted react-router source to modify link actions for an electron app). But I think this culture has probably peaked in hooks.

Declarative timeout is very convenient in many cases:

But, as we've seen, it makes some other cases impossibly difficult, and can introduce wasted renders.

What if we could have the best of both worlds — provide a nice declarative API for 90% use cases, and also an imperative one to please old grumpy people like me? Yes we can:

Dear library authors, please do expose lower-level APIs. Don't make me copy-paste your code to do things a little differently from the 95% use case.

Want to learn more about pathological cases in React hooks? I have a lot of that. See you around!

Tweet
Share
Discuss on Twitter
More? All articles ever react hooks javascript frontend
Written in 2021 by your friend, Vladimir. Follow me on Twitter to get post updates. I have RSS, too. And you can buy me a coffee!
Older
Are many useStates better than useState(object)?
Newer
How to replace useState with useRef and be a winner